What is PE / Premature Ejaculation?

Premature ejaculation is a form of sexual dysfunction that happens when a man experiences an orgasm and discharges (ejaculates) semen earlier than he or his partner would want. It frequently occurs prior to or immediately after penetration during intercourse. Premature ejaculation may be irritating and can lead to frustration for you and your sexual partner .

What is usual premature ejaculation time ?

Most men lasts for 5 to 10 min.  A study of 500 couples discovered that the average time for ejaculation was roughly 5-and-a-half minutes after beginning intercourse. Premature ejaculation is defined by international rules as ejaculating within one minute of entering your partner.However, you and your partner must determine whether you are satisfied with the time it takes you to ejaculate.

Cause of premature ejaculation 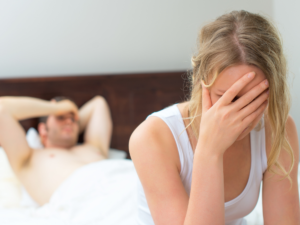 Premature ejaculation is caused by physical, physiological, and emotional/psychological causes.

Among the physical and chemical issues are:

Among the emotional or psychological factors are:

Dr. Rameez Shaikh, MD Consultant Psychiatrist and Sexologist says that “Depending on the reason, there are several therapy options for premature ejaculation. Among these are behavioural treatment, counselling, and medicines. Most reasons of premature ejaculation are often addressed initially with behaviour therapy and/or psychotherapy to address any underlying emotional issues, performance anxiety, or stress”

Behavioral treatment entails experimenting with various strategies to postpone your orgasm. Its purpose is to educate you how to regulate your body and emotions. Among the methods are: