Some individuals believe that premature ejaculation (PE) is an illness or an unfixable issue. Others might believe that certain guys are born with more control than others. These assertions are just false. PE occurs when a guy climaxes and ejaculates (releases semen) earlier than desired during intercourse. It’s a very frequent sexual problem. PE affects almost one-third of males between the ages of 18 and 59. If a man has PE for an extended length of time, he may get stressed. PE can make men and their partners miserable or ashamed of their sexual relationships. There is help available, and your feelings can change. 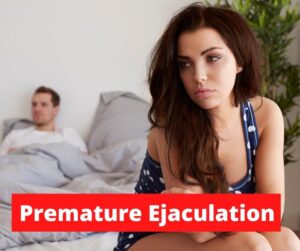 Ejaculation is the ejection of sperm from the penis (sexual climax). The brain transmits messages to the genital region through nerves in the spinal cord when a man is sexually excited, causing the pelvic muscles to contract. Waves of muscular contractions carry sperm and a little amount of fluid from the testes to the vas deferens during orgasm. To preserve the sperm, the seminal vesicles and prostate produce additional fluid. This sperm-and-fluid mixture (semen) travels through the urethra to the penis’ tip, where it is ejaculated (released).

What is the definition of premature ejaculation?

Premature ejaculation occurs when a guy is unable to regulate his ejaculation timing and ejaculates before he and/or his partner are ready for it. Both the male and his partner may be distressed as a result of this.

When a man ejaculates too quickly, how soon is too soon?

A popular definition of premature ejaculation for a heterosexual guy is ejaculating within one minute of his penis entering his partner. ‘Too soon,’ on the other hand, has no set time. Not simply the time it takes a man to ejaculate, but also the lack of control over ejaculation and the misery it can bring to one or both partners is referred to as premature ejaculation.

The most frequent male sexual issue is premature ejaculation, which affects men of all ages. Younger males are more prone to premature ejaculation. This is due to the fact that ejaculation takes longer as men age, and younger men may be less sexually experienced or feel insecure in their current circumstances.

Is there a difference between different sorts of premature ejaculation?

What is the treatment for premature ejaculation?

Premature ejaculation treatment is typically determined by the man’s relationship situation and the origin of the disease (whether it is lifelong or acquired).
Sex therapy, behavioural approaches, sprays to diminish penile sensation, oral medications, and erectile dysfunction therapies (if erectile dysfunction is also an issue) are all options for treating premature ejaculation.
A expert, such as a sex therapist, a sexologist, or an urologist, may be recommended by your doctor.

Low vitamin D levels have been linked to an increased risk of acquired premature ejaculation.

What is the Best medicine for early discharge ?

Drugs including clomipramine, fluoxetine, paroxetine, sertraline, and tramadol are used to treat PME. If one medicine fails to work, your doctor may recommend that you try another. 1-Adrenoceptor antagonists are another medication treatment option for others.  PE medications can be used every day or just before intercourse. Based on your level of activity, your health care physician will recommend when you should take a medicine.Most physicians recommend waiting two to six hours before having sex.

What are the foods to cure premature ejaculation ?

What is sex therapy, exactly?

Counseling with a sex therapist who specialises in anxiety in males with either lifelong or acquired premature ejaculation can be very beneficial.
Counseling can assist in identifying any underlying sexual or relationship difficulties by providing an open forum for conversation.

Which exercise is best for premature ejaculation?

Many suggest to use KEGEL exercises for PME but can take long time before effects are noticed.

What do you mean by behavioural techniques?

In the therapy of premature ejaculation, what role do partners play?

Premature ejaculation can harm both the male and his sexual partner if he is in a relationship. Partners may provide invaluable support and assistance in determining the best treatment choice, and it is beneficial to include your spouse in discussions with your doctor.

What are the Treatment options at Mind & Mood Clinic, Nagpur ?

Dr. Rameez Shaikhg, MD is Consultant Psychiatrist and Certified Sexologist in Nagpur. We provide Sex Therapy, Behaviour Therapy, as well as Medication for Severe Premature Ejaculation. We have scientific based treatment available for Premature Ejaculation which last life long. We provide information and treatment  for those actively managing their sexual health and those ready to make healthy changes in their lives. Book Doctor Appointment on Call. Call or Visit Our Clinic In Nagpur To Discuss Your Needs. 100% Privacy. Male Sexual Problems. Female Sexual Problems. Online Consultation Available.