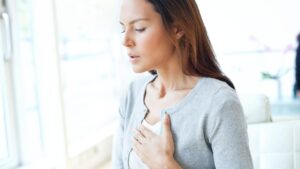 Panic disorder is diagnosed in patients who have spontaneous, seemingly unrelated panic attacks and are preoccupied with the prospect of a recurrence. Panic attacks can strike at any time, even when you’re sleeping. Panic disorder normally strikes adults after the age of 20, although it can strike children as well, and many children suffer panic-like symptoms (“fearful episodes”).

Panic disorder affects about 2-3% of Population each year, and it is twice as common in women as it is in males. Panic disorder can significantly disrupt daily life, forcing people to miss work, visit multiple doctors, and avoid situations where they are afraid of having a panic attack. When persons have agoraphobia as well as panic disorder, the interference is highest.

Many people are unaware that they have an illness that is both genuine and treatable. Some people are terrified of being labelled a hypochondriac if they inform anybody about their symptoms, including their doctors and loved ones. Instead, they suffer alone, isolating themselves from friends, family, and anyone who could be supportive or helpful.

A panic attack is characterised by a sudden onset of extreme fear or discomfort that lasts for a few minutes and includes at least four of the following symptoms:

Limited-symptom panic episodes, which are identical to full-blown panic attacks but have fewer than four symptoms, are experienced by certain persons.

Although worry is sometimes accompanied by bodily symptoms such as racing heart or stomach knots, the strength and duration of the symptoms distinguishes a panic attack from other anxiety symptoms. Panic attacks usually reach their peak severity in 10 minutes or less and then start to go away.

People with panic disorder frequently attend emergency departments or doctors’ offices, thinking they have a life-threatening ailment, due to the severity of the symptoms and their tendency to resemble those of heart disease, thyroid difficulties, breathing abnormalities, and other illnesses.

Panic attacks can strike at any time, whether you’re calm or nervous. Although panic attacks are a defining feature of panic disorder, it is not uncommon for people to have panic attacks in the context of other mental illnesses.

Panic episodes are excruciatingly uncomfortable and terrifying. As a result, persons who have had multiple panic attacks may become very concerned about having another attack and may adopt lifestyle modifications to avoid panic episodes. For example, they may avoid activity in order to keep their heart rate down, or they may avoid particular locations.

It used to take months or years, as well as a lot of frustration, to acquire a thorough diagnosis. For fear of being labelled a hypochondriac, some people are frightened or ashamed to inform anyone, including their doctors or loved ones, about their symptoms. Instead, they suffer in silence, avoiding friends, relatives, and anyone who might be able to help. Others who suffer from panic attacks are unaware that they have a serious and treatable condition. People will feel more empowered to report their problems with a healthcare provider and seek appropriate treatment as a result of better education, we expect.

Panic disorder, like other anxiety disorders, can be treated.

With professional help, the majority of people see considerable improvements. Treatment effectiveness varies from person to person. Some people may react to treatment in a matter of months, while others may require more than a year. If a person has several anxiety disorders, depression, or substance abuse, treatment can be challenging, which is why it must be individualised to the individual.

Several common procedures have proven beneficial, despite the fact that treatment is personalised. Therapy, medicine, or a mix of the two will be used by therapists.

Dr. Rameez Shaikh, MD is consultant psychiatrist and Therapist in Nagpur  does psychotherapy for panic attack  and has  developed seven steps to break the cycle of panic attack . For Panic attack and anxiety disorder we offer psychotherapy through online as well as offline mode.